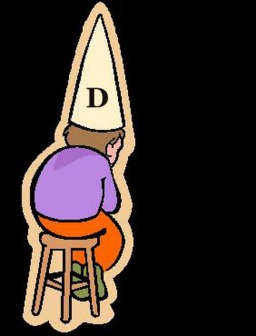 The term “dumbing down” originated in 1933 as movie-business slang, used by motion picture screenplay writers, meaning: “to revise so as to appeal to those of little education or intelligence.” In the sixties one often heard the statement that our public educational system was degrading to “dumb us down.” In this electronic age, computerized systems tell the cashier how much change to return to the customer, until an electrical blackout! Then “dumbness” panics. Yet, if my generation feels superior because we learned our “A, B, C’s” on such matters, our boasting is not earned.

I was a middle of the road scholar. That means I was somewhere between a B and a C. An A was on my horizon, but I seldom looked up! In my senior year in high school I needed a credit to graduate. I had a choice between Spanish or typing. Neither appealed to me, but I wanted to graduate. I chose typing! I could have benefitted from both. In college I detested algebra, chemistry, and biology. I managed B grades for what I considered worthless time spent. Yet, even with all those studies, our generation was actually “dumbing down.”

1895 Eighth graders passed those tests! Why? They studied subjects that we never did. In comparison we may be like the person who is asked, “Who is buried in Grant’s tomb?” and reply “Lincoln?”!

We may justify ourselves by saying, “I’ll never have any use for those subjects in real life.” But, over that same period of time, our knowledge of God’s word also decreased. Not just knowledge, but respect for the Author! Maybe we thought God’s word was obsolete and didn’t speak to today’s needs? There is a passage in the Old Testament that expresses a principle that still applies today.

“My people are destroyed from lack of knowledge. ‘Because you have rejected knowledge, I also reject you . . . because you have ignored the law of your God, I also will ignore your children.’” (Hosea 4:6).

Have we dumbed ourselves down spiritually?