“The teachers of the law and the Pharisees brought in a woman caught in adultery. They made her stand before the group and said to Jesus, “Teacher, this woman was caught in the act of adultery.  In the Law Moses commanded us to stone such women. Now what do you say?” (John 8:3-5 NIV). 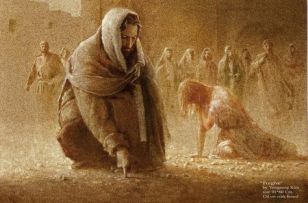 “Caught”!  Talk about embarrassment?  Shame would be plastered all over her face.  Shame and fear would be struggling for dominance to see which would control her emotions!  Her sight was glued to the ground.  She could not bring herself to look at her accusers nor the one whose judgment they sought.  That pious crowd was asking the young Rabbi, “What do you say?”  She already knew the answer.  This was a biblical crowd, waiting to do the scriptural thing, to a person without Biblical authority.  Her life could be calculated in minutes not years.  “Caught”!  He had escaped, not her.  “Caught in the act of adultery.”  She didn’t have time to dress.  Her attempts to be presentable in a crowd calling for her blood was futile.  This young Rabbi would seal her fate.  She was going to die.  It was the Law and she had broken it!  She knew the consequences, yet she had taken her chances and lost.  This was the end.  Her sins had found her out and the price would be painful and permanent.

Everyone in that crowd, other than the young Rabbi, were sinners.  This included those who brought the adulteress, those already in the Rabbi’s presence, and the twelve!  The only difference between them and the woman was, they had not yet been “caught”!  The young Rabbi didn’t answer their question.  They persisted.  Yet, he did not open the Law.  He didn’t touch it top, sides, nor bottom.  He refused to counter their question with scripture.  What kind of “teacher” was he?  His only reply was, “If any one of you is without sin, let him be the first to throw a stone at her.” (John 8:7 NIV). That was it!  He left the application with them.  The lesson was applied and they stopped pointing at her and vanished.  No longer judges.  Just snared in their own actions.  They were “caught” sinners, “caught” by their own thoughts!

Some think the young Rabbi let that woman off on a technicality.  Lawyers do that, don’t they?  If “technicality” is our way out when we’re caught, we have accepted the wrong solution!  Jesus did not free her because he was lazy in applying the Law.  He didn’t catch her in the act, they did.  But, “they” were no longer there to accuse her of what they witnessed.  Being convicted of their own sins, they disappeared.  Today, some believe they are ordained to be judge and jury of others, yet they haven’t been “caught” yet!  We aren’t free of guilt and may be headed toward a showdown with God’s wrath.  God is not ignorant of our sins.  We may think we have escaped, like the man in that adulteress relationship, but to think that way makes us the fool, not God!

Did that man tell his male friends about his “close call”?  Did he laugh about not being caught?  Did he learn a lesson, or just think how lucky he was and next time he would be more discreet?  It’s easy to point a condemning finger at someone else who has been “caught in the act” and never entertain the thought, “Let him without sin be first to cast a stone.”  Being in a crowd that can quote book, chapter, and verse is very comforting.  It seems so right!  It’s easy to feel more righteous than others when you haven’t been “caught”!