END OF TIME OR TIME OF THE END? 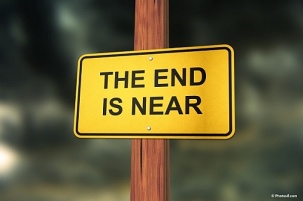 That war caused individuals such as Charles T. Russell, Judge Joseph Rutherford, Mary Baker Eddy, and a multiplicity of others to believe the “end time” was near.  Rutherford wrote and widely distributed a small pamphlet, “Millions Now Living Will Never Die.”  1925 was the date given.  When nothing happened, his organization collected as many copies as possible and destroyed them.

On September 3, 1939 to September 2, 1945 the globe was locked in what was referred to as World War II.  60 million civilians and military deaths occurred with 20 million being military fatalities.  Hitler murdered over 6 million Jews and many believed he was the “666″ of Revelation 13.  However, the end did not come!

With the close of hostilities in 1945, a new war opened up two years later, referred to as the Cold War.  It was between the United States and the Soviet Union.  It ended in 1991 when Russia opened their doors to the West.  In the 1970’s, Hal Lindsey, a Baptist minister, authored “The Late, Great Planet Earth.”  Although Lindsey was hesitant in giving dates, he started with the return of the Jews to Palestine in 1948 and gave a sequence of dates culminating in the early nineties.  The book sold into the millions, but the expected end did not materialize!

In each of these periods, the book of Revelation received a fresh audience.  A new generation of “seers” jumped into the dating game.  Some, when their date refused to develop, simply recalculated and offered a fresh one.  Some took the “666″ of Revelation 13:18 and assigned it to presidents, dictators, and others with bazaar formulas.   Each was rewarded with a limited notoriety and the usual failure.

In June 1992, the Campbell Street congregation sent a mission group to Russia to evangelize.  From time to time individuals were seen on the streets with signs giving October of that year as the end of time.  I took a team back to Russia in October, but the signs had disappeared.  One translator in June had asked, “Aren’t you apprehensive about the world coming to an end?”  I wasn’t.  I don’t put much stock in signs because they can be misread due to misconceptions based upon a misunderstanding of scripture!

The book of Revelation has been dated as late as the nineties, or as early as the late sixties in the first century.  Most accept the late date and give it a progressive fulfillment due to that dating.  That mistaken expectation has been applied by each new generation to signs which they read as the coming end.  Even the first century church expected this end of time scenario.  In spite of Jesus’ statement that only the Father knows, some believe they have been given special insight which was withheld from Jesus (Matthew 24:36).

Most take John’s words in Revelation and apply them to their generation, rather than the one he originally penned it to.  Revelation is not about the end of the universe, but about the time of the end of the first covenant.  The book begins and ends with specific words that are difficult to stretch 2,000 years beyond John’s time.  He writes to first century congregations, not twenty-first century ones (Revelation 2 & 3)!

John warns them of “things which must shortly come to pass” (Revelation 1:1).  If you were the recipient of John’s letter in the first century, what would “shortly come to pass” mean?  What would “for the time is at hand” suggest?  Only someone in 2017 would make “shortly” and “at hand” cover 2,000+ years to force John to say what they believe!

The book begins with “shortly come to pass” and “for the time is at hand” and ends with “time is at hand,” and “Behold I come quickly.”  John’s response is, “Even so, come, Lord Jesus.”  If you were watching the weather channel and the announcer said that an F5 tornado was being tracked directly to your house and was “at hand” and would be there “quickly,” would you sit down and begin a 5,000-piece puzzle or immediately seek safety?

I am not concerned with the “when.”  I am interested in thanking Jesus for being my sin sacrifice which gives me full fellowship with my Heavenly Father!